Today a lot of research is being carried out in osteopathy to expand and improve its methods of diagnosis and treatment. Due to intensive teaching activities and work in practice various schools of thought have developed within osteopathy. Biodynamic osteopathy – which is also increasingly practiced in Switzerland – is based on the fundamental principles established by A. T. Still and wants to support the body in harmonizing its functions and thereby reaching a state of health.

The American physician Andrew Taylor Still (1828 – 1917) was the founder of osteopathy more than 130 years ago. He based his approach on the understanding that the organism represents an indivisible unit and that health depends on the functional balance of the totality of all its structures. He developed a holistic method of diagnosis and treatment which activates the body’s innate self-healing forces by means of manual therapy. 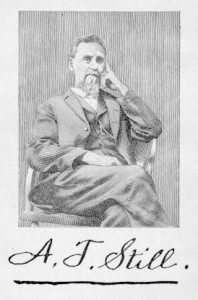 Still practiced his new treatment approach with success and founded the “American School of Osteopathy” in Missouri in 1892. Subsequently more colleges were founded all over the country and in 1960 osteopathy was officially recognized in the United States. Since the 1950s Osteopathy has been spreading also in Europe where it is taught and practiced in almost all countries today.

In Switzerland osteopathy has been taught for more than twenty years. Since 2006 it has been recognized and legally regulated as independent medical profession by the cantonal Departments of Health.

Since January 1, 2013 the professional title «Osteopathin» (female practitioner) and «Osteopath» (male practitioner) is protected in Switzerland and only practitioners who have acquired the intercantonal diploma in osteopathy may call themselves «Osteopath/in GDK” (in the cantons AR, BL, OW, SO and TI this is not yet stipulated by law).

Thus Switzerland is the second country in Europe, after the UK, to recognize osteopathy and to regulate the official professional title.

The Swiss Association of Osteopaths (SVO, Schweizerische Verband der Osteopathen) guarantees the highest quality of assistance/support regarding the basic osteopathic training as well as regarding the required continuing professional education. It is also the main body to consult concerning professional policy-related or administrative questions.